I wrote a short story from the viewpoint of a rapist who raped a little girl. So people accused me. I was interviewed. They'd say, "You like to rape little girls?" I said, "Of course not. I'm photographing life." I've gotten in trouble with a lot of my shit. On the other hand, trouble sells some books. But, bottom line, when I write, it's for me. (He draws a deep drag off his cigarette.) It's like this. The "drag" is for me, the ash is for the tray... that's publication.

I never write in the daytime. It's like running through the shopping mall with your clothes off. Everybody can see you. At night...that's when you pull the tricks...magic.

I always remember the schoolyards in grammar school, when the word "poet" or "poetry" came up, all the little guys would laugh and mock it. I can see why, because it's a fake product. It's been fake and snobbish and inbred for centuries. It's over-delicate. It's over-precious. It's a bunch of trash. Poetry for the centuries is almost total trash. It's a con, a fake.

There have been a very few good poets, don't mistake me. There's a Chinese poet called Li Po. He could put more feeling, realism, and passion in four or five simple lines than most poets can in the twelve or fourteen pages of their shit. And he drank wine too. He used to set his poems on fire, sail down the river, and drink wine. The emperors loved him, because they could understand what he was saying...but, of course, he only burned his bad poems. (laughs)

He's unreadable and overrated. But people don't want to hear that. You see, you cannot attack shrines. Shakespeare is embedded through the centuries. You can say "So-and-so is a lousy actor!" But you can't say Shakespeare is shit. The longer something is around, snobs begin to attach themselves to it, like suckerfish. When snobs feel something is safe...they attach. The moment you tell them the truth, they go wild. They can't handle it. It's attacking their own thought process. They disgust me.

ON HIS FAVORITE READING MATERIAL:

I read in The National Enquirer, "Is your husband homosexual?" Linda had said to me, "You have a voice like a fag!" I said, "Oh, yeah. I always wondered." (laughs) This article says, "Does he pull his eyebrows out?" I thought, shit! I do that all the time. Now I know what I am. I pull my eyebrows out...I'm a fag! Okay. It's nice for The National Enquirer to tell me what I am.

ON HUMOR AND DEATH:

There's very little. About the last best humorist was a guy called James Thurber. But his humor was so great, they had to overlook it. Now, this guy was what you call a psychologist/psychiatrist of the ages. He had the man/woman thing -- you know, people seeing things. He was a cure-all. His humor was so real, you almost have to scream out your laughter in a frantic release. Outside of Thurber, I can't think of anybody...I've got a little touch of it...but not like he did. What I've got I don't really call humor. I'd call it..."a comic edge." I'm almost hooked on the comic edge. No matter what happens...it's ludicrous. Almost everything is ludicrous. You know, we shit every day. That's ludicrous. Don't you think? We have to keep pissing, putting food in our mouths, wax comes in our ears, hair? We have to scratch ourselves. Really ugly and dumb, you know? Tits are useless, unless...

You know, we're monstrosities. If we could really see this, we could love ourselves...realize how ridiculous we are, with our intestines wound around, shit slowly running through as we look each other in the eyes and say "I love you," our stuff is carbonizing, turning into shit, and we never fart near each other. It all has a comic edge...

And then we die. But, death has not earned us. It hasn't shown any credentials -- we've shown all the credentials. With birth, have we earned life? Not really, but we're sure caught with the fucker...I resent it. I resent death. I resent life. I resent being caught between the two. You know how many times I've tried suicide? (Linda asks, "Tried?") Give me time, I'm only 66 years old. Still working at it.

When you have a suicide complex, nothing bothers you...except losing at the track. Somehow that bothers you. Why is that?...Because you're using your mind [at the track] not your heart.

I never rode a horse.

I'm not so interested in the horse, as in the process of being right and wrong...selectively.

I tried to make my living at the track for a while. It's painful. It's exhilarating. Everything is on the line -- the rent -- everything. But, you tend to be too cautious...it's not the same.

One time I was sitting way down at the curve. There were twelve horses in the race and they all got bunched together. It looked like a big charge. All I saw were these big horses' asses going up and down. They looked wild. I looked at those horse asses and I thought, "This is madness, this is total madness!" But then you have other days where you win four or five hundred dollars, you've won eight or nine races in a row, you feel like God, you know everything. It all fits together.

CB: All your days aren't good, are they?

CB: Some of them good?

CB: Many of them?

(After a pause, the laughter of surprise)

CB: I thought you were going to say "Just a few..." How disappointing!

People, mostly, I can do without. They don't fill me, they empty me. I respect no man. I have a problem that way...I'm lying, but believe me, it's true.

ON BEING RECOGNIZED AT THE TRACK:

The other day I'm sitting there and I feel them staring at me. I know what's coming, so I get up to move, you know? And he says, "Excuse me?" And I say, "Yes, what is it!" He says, "Are you Bukowski?" I say, "No!" He says, "I guess people ask you that all the time, don't they?" And I say, "Yes!" and I walked away. You know, we've discussed this before. There's nothing like privacy. You know, I like people. It's nice that they might like my books and all that...but I'm not the book, see? I'm the guy who wrote it, but I don't want them to come up and throw roses on me or anything. I want them to let me breathe. They wanna hang out with me. They figure I'll bring some whores, wild music, and I'm gonna slug somebody...you know? They read the stories! Shit, these things happened 20 to 30 years ago, baby! 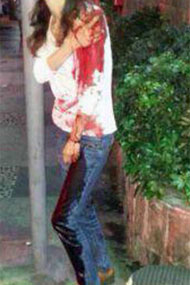